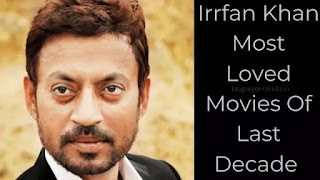 Irrfan Khan – You surely have heard of this name before. The iconic sensation of Bollywood and the inspiration of many dreamers who try to put their feet in the Hindi cinema. His movies are loved by each and every type of Indian, that is why he is the most loved and respected underrated actor of Bollywood.

Irrfan khan’s movie genre is a kind of reality-based in which a viewer can see himself as his life is portraying on the screen.

In Bollywood, many may come and go but the ones who succeed have only one thing in common which is hard work and dedication to their work. As you know its nepotism world, everyone hears and sees only 2 things – Money and connections. But Irrfan Khan was above all of this.

He came from the normal middle-class family and he only had dreams with him when he first came to Mumbai. Started working from an assistant in small movies to working in a big Hollywood franchise like Jurassic park, He shut the mouth of all the fake mouths who utters only people from big family can survive in Bollywood.

Relevant Read: 6 Most Unbelievable Survival Movies Which Blow Your Mind Away

So through this medium today, I got an opportunity to put a glimpse on some of his most loved movies of the last decade. I hope you will re-watch it again once you get your eyes on that.

This is a masterpiece for those who love rom-com kind of movies. Jaya and Yogi set their journey together to trace and put an end on their past relationships where they both get closed to each other and the things end up falling for each other. Such a simple and beautiful movie which you will get engaged in without realizing the time. It’s available on Netflix.

This movie is a benchmark for those who think paying bribes or having connections can make their children’s future brighter. The story revolves around this – Raj and Mita want to book admission seats for their daughter Piya in one of the top-ranking schools in Delhi but eventually students must live within 3 k.m of radius from the school.
Then they shift from their parental home to some rental home till the time their daughter gets the admission. After many ups and down Piya gets the admission but raj was not satisfied and the reason for his dissatisfaction you will get to know after you watch the movie. It’s available on Hotstar.

A girl named Piku a decent middle-class Indian girl who works as an architect in Delhi. Her father’s name is Bhaskar Banerjee which is portrayed by Mr. Amitabh Bachchan. Despite all the problems she faces at home with her father, she didn’t leave him alone for once. That is the most wonderful part of the movie when she stood with him like a wall.
Her father was having a constipation problem for so long and every day he was a pain in the head for her and curse her for all small mistakes. After Irrfan khan’s entry movie hit a different path and all of the sudden their problems turn into new learnings every day. A must watch gem with family.

This movie is based on Kashmir’s conflicts and has a violent frame. When he gets the news of his father’s disappearance then he goes insane and searches for his father’s entity and suddenly he found out that his mother is in a relationship with his uncle. After many ups and downs, he traces his father and suddenly the role of Irrfan khan comes up.
Irrfan’s dialogues in the movie are so to the point that you will not gonna turn your head sidewards. The main actor and actress leads are Shahid Kapoor and Shraddha Kapoor. A worldwide loved gem of Vishal Bhardwaj.

This movie is based on the true event which occurred in Noida with Aarushi Talwar. Her murder case is like the unsolved threads and the biggest mystery in India’s crime investigation history. Through this movie, they have portrayed how Aarushi talwar got murdered and how police got involved in this.
Sometimes we cannot see the other side of the story, so this movie is a totally unbiased and complete portrayal of the truth which happened in the investigation. If you are still unaware of what has really happened with the Aarushi Talwar murder case and who was involved in it then you should watch this movie to know the truth.
Article Categories:
Movie Blogs