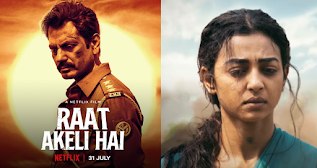 Nawazuddin Siddiqui and Radhika Apte much-awaited starrer ‘Raat Akeli Hai’ to be hit on Netflix today at 12:30PM. The film has been in talks for too long as the movie plot is a murder mystery based.
As we have seen the performance of both the actors in different genres films so no doubt this time also they both will be going to deliver their best as always.
According to IMDB and Bollywood Movies Ratings, this movie is a sure winner as its plot and cast look too promising.
Raat Akeli Hai already hit 7+ million views on youtube when a trailer launched a week ago and the film has already on hype as both the actors have very high TRPs on the Netflix platform. They both have seen together previously in Badlapur and Manjhi- The Mountain Man.

What is the Movie Plot of Raat Akeli hai on Netflix?

‘Raat Akeli Hai’ story revolves around the killing of a high profile man in a small Indian town and then Nawazuddin has been appointed to solve the murder mystery case. Nawaz’s character is known as Jatil Yadav’ and Radhika Apte’s character name is ‘Radha’ who is the mistress of the victim and seems a bit connected with this revolving murder case.
Nawaz has to go deep in the dark to solver his case and you will be seeing his inspiring inspector skills how he handle the victim’s family statements and close the case in its best possible way.

Raat Akeli Hai assembles brilliant cast members including Nawazuddin Siddiqui and Radhika Apte in the lead, actors like Shweta Tripathi, Tigmanshu Dhulia, and Aditya Srivastava are also playing major roles in the film.
This is Netflix’s 17th Movie which has been released on the OTT platform and now it seems viewers enjoy watching movies on Netflix rather than in theaters. As the theaters are still closed we can’t predict anything about it so all the movie lovers out there enjoy this binge-watch on Netflix.
Article Categories:
Movie Blogs